The Vase Métro by Naoto Fukasawa is inspired by the ceramic white-tile with bevelled edges of the Parisian underground.

The Manufacture Nationale de Sèvres commissioned the Japanese designer Naoto Fukasawa to create a new vase. The Vase Métro is inspired by the ceramic white-tile with bevelled edges of the Parisian underground.
Limited edition (100 copies): with an original illustration signed and numbered by Naoto Fukasawa (16,54x11,8 inch)

Born in 1956, Naoto Fukasawa has worked in a consulting capacity as well as designes in Japan, Europe, and other parts of Asia. His design experience is both diverse and widespread, ranging from electronics to furniture and he is recognized worldwide. He continues to hold the "Without Thought" work-shops, using his personal vision regarding people's unconscious memories and actions as a direction leading to design. In 2006, he founded "Super Normal" with Jasper Morrison. In 2007, he has awarded the distinction of Honorary Royal Designer for Industry by the British Royal Society of Arts. In 2009, he held an exhibition with photographer Tamotsu Fujii entitled "The Outline: The Unseen Outline of Things" at 21_21 Design Sight, and published a book of the same title (Hachette Fujingaho 2009). He has also authored "An Outline of Design" (Toto Shuppan); a compilation of his works in "Naoto Fukasawa" (Plaidon 2007); and co-authored "Super Normal" with Jasper Morrison (Lars Müller Publishers 2007). 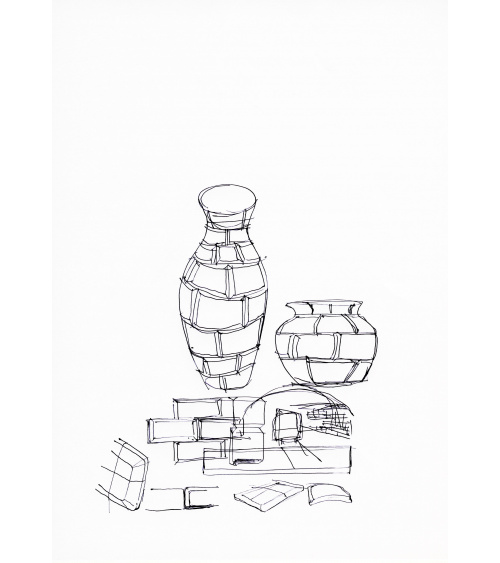 Price €50.00
The Vase Métro by Naoto Fukasawa is inspired by the ceramic white-tile with bevelled edges of the Parisian underground.

