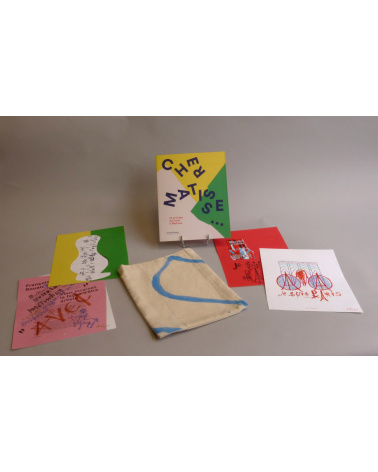 On the occasion of the release of Cher Matisse... we asked Claude Viallat and Jacques Villeglé, two great artists who have "looked at" Matisse, to imagine a limited edition.

On the occasion of this edition, we asked Claude Viallat and Jacques Villeglé, two great artists who have "looked at" Matisse, to imagine a limited edition. They both proposed an original idea, at the heart of their artistic practice.

Claude Viallat, an original coton pouch he painted, in which the book slips, and Jacques Villeglé took hold of the press sheets in order to compose 12 exceptional and unique collages.

Claude Viallat was born in Nîmes in 1936 in a protestant family and was brought up in a small village in the Gard, Aubais, rich from a bull-fighting tradition. He went to the Beaux-Arts of Nîmes where he meets a few of the artists he will work with later and create the movement “Supports/Surfaces”. The founding exhibition took place in 1969 at the Musée d’art modern de la ville de Paris. Claude Viallat’s style is sustainable: it is characterized by a repetitive marking system, that has a “random” form. His first exhibition in a museum took place at Saint-Etienne in 1974. In 19802, he is discovered by a larger audience thanks to the CAPC of Bordeaux, then two years later with the “Grande retrospective” at the Centre Pompidou in Paris. Viallat was a teacher for a long time in various art schools in province, then in Paris. There is not a year when one of his works isn’t exhibited. The past few years, he exhibited at the Musée Matisse de Cateau-Cambrésis, Clermont-ferrand, Bergma,e Céret, Toulouon and Perpignan, the Villeneuve castle in Vence, Biarritz, Nîmes, Castries, Colmar, Hégenhem in Perthus, Pont du Gard…

Jacques Villeglé was born in Quimper in 1926. In 1947 in Saint-Malo, he started a collection of found objects: steel wires, waste from the Atlantic wall… in December 1949, he limits his appropriative behavior to lacerated posters. In June 1953, the “Hepérile Eclaté” phonetic poem by Camille Bryen was published, and was made illegible through the weft of glass spray of his intellectual partner Raymond Hains. On the 27th of October 1960, Arman, Klein, Raysse, Tinguely, Hains, Dufrêne, Spoerri and Villeglé sign the constitutive declaration of New Realism, that promulgates “new perceptive approaches of reality” and is anchored in a non-technical art, close to what we find in the street. He takes posters that were lacerated by time or anonymous hands on reserved or wild places, seeing in a blink the part within them that constitutes a natural art piece. Thus, he changes their status. With socio-politic cryptograms and wall graffiti he uses to create an alphabet and texts. These three original silkscreens, taken from his “socio-political alphabet” were printed at Jean Villevieille’s workshop. They are signed and numbered by the artist.

Price €20.00
Matisse was one of the most important artists of the 20 th  century and even sixty years after his death, he still marks and influences spirits....

This book presents an Encounter with the French painter Claude Viallat in his Studio at Nîmes (south of France). Text in French by Michèle Lécluse.

