Cédric Ragot created the Oscar table centre, a delicate assembling of porcelain and wood. The porcelain bowl, elegantly enhanced with a platinum border, fits onto its base of unvarnished oak.

Cédric Ragot created the Oscar table centre, a delicate assembling of porcelain and wood. The porcelain bowl, elegantly enhanced with a platinum border, fits onto its base of unvarnished oak.

Oscar is the illustration of a link of dependency between two architectural elements: one cannot go without the other in order to conserve their equilibrium; only the imprint immerging from the enamel surface reveals this assembling.

Cédric Ragot, polymorphous designer, cultivates a transversal approach to industrial design and creativity in the broadest sense. While the manifestations of his vision are many and various, all evince an abiding interest in forward thinking and a clear, unequivocal reading of the object. Cédric Ragot is active in a great many sectors, working with well-known brands like Paco Rabanne Parfums, Cappellini, Rosenthal, Veuve Clicquot, Panasonic, Krups, LaCie and Häagen-Dazs, to name just a few. His creations have won him a string of honors, including a Good Design Award for his Fast vase with Rosenthal in 2007, a Wallpaper* Design Award for his Majordome pedestal tables with Roche Bobois in 2008, and two Reddot Design Awards, for the LaCie Flat Cables in 2009 and the Krups 3Mix 5000 Mixer, an emblematic product for the brand in 2012. In addition, certain of his pieces have been selected by the Fonds National d’Art Contemporain and are on view in Paris, Hanover, Vienna, New York and Milan.

Odile Decq designed an object –in limited edition- which is the exact transposition of her creation for the Opera Garnier in Paris, called it... 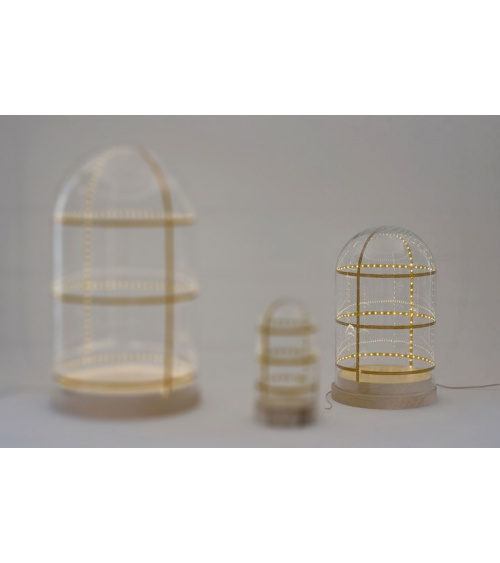 His collection Full Moon is a set of original ceramic pieces, imagined by Christian Ghion.

Paperlamp is a white sheet of paper on a white wall. A pure geometric form, standing out from the wall by the diffusion of light it contains.

Designer David Dubois, during his Cirva residency at Marseille in 2014, experimented with variations on a volume of blown glass, and brought forth...

This 1/5 scale model is made of elements in balsawood connected together and is directly inspired by fabric-covered model airplanes.